C Google Search
B Google Translate
A Log in

Question: If Fish Finger (the class bear) got lost, what could the class do to find him? Think of some ideas with your child and agree that one option could be a 'lost poster' and explain what these are if necessary. Explain that learning about adjectives is really good for if you ever need to write a lost poster as you can really describe to the person reading what the lost item looks like. Emphasise with a discussion similar to:
"if you just was to write 'penguin', what if there was a pink and blue penguin then they might think that is Fish Finger...and if you just said black and white then they might think it was a hard plastic figure..."

Explain that today your child's job is to create a lost poster...but it is not for Fish Finger or an animal, it is for a person. Highlight that this person is not actually lost, but is 'wanted' by the king for some thing bad he has done - can they guess who?

Explain that we are going to go back to the day before 5th November 1606 - the day that King James had found out about Guy Fawkes plan but had not yet caught him in the act. How would King James be feeling? (Highlight that their emotion ideas are also adjectives!). In order to find Guy Fawkes, he needs your help! He wants you to create a 'wanted poster' by describing what Guy Fawkes looks like, so if anyone sees him they can alert the police straight away.

Share the image of Guy Fawkes. What sort of things could they describe? (hat, clothes, moustache, hair, eyes, personality...)

First, brainstorm/label adjective ideas around his picture or on paper like yesterday's activity, trying to pick out as many different features to describe as possible. Then, support your child in putting all of these ideas together into full sentences.

Have you seen this __(personality) mean/mischievous/naughty…__ man? 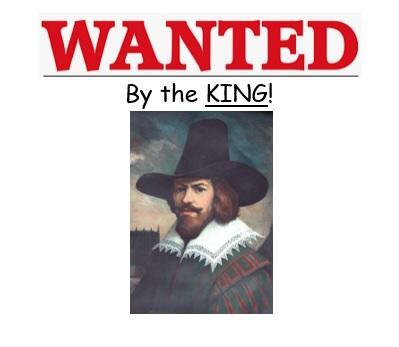 Build a tower out of lego or similar toys but hide it from your child. Describe the tower to your child e.g. the 1st cube is blue, the 2nd cube is red. Ask them to follow the instructions and build the same tower without looking at yours.

Read the problem together with your child. Using lego or similar can they create a tower and then write instructions on how to build that tower using 1st 2nd 3rd 4th 5th etc.